The work during this fieldwork season focused on the eastern Jafr study area of the research program. Within this sector, the field exploration concentrated on the 2 study areas of Upper Wadi Hudruj and Jibal al-Khashabiyeh, for which distinct research aims oriented the choice for the archaeological survey during this season. In the sector of the upper course of Wadi Hudruj, preliminary visits allowed the identification of flint deposits, raising the question of a possible exploitation of the raw material by the nomadic pastoral populations during the Protohistory. The theme 3 of the scientific program concerns indeed questions in close connection with the exploitation of natural resources and implementation of networks of production and desert exchanges, of which, flint knapping holds an essential place. This is moreover a fundamental aspect of the recent research undertaken in southern Jordan’s desert margins, especially in the Jafr basin.In view of these discoveries, one aim of the fieldwork in the area of Upper Wadi Hudruj was to evaluate the extent of this exploitation of the flint deposits in southeastern Jordan deserts. Besides, a primary goal of the fieldwork exploration was to bring new information allowing to provide a better definition of the protohistoric settlement patterns, and the land use of this territory by the pastoral nomadic populations from the Neolithic to the Early Bronze age periods. The results gathered during this fieldwork season allow to answer to some of these questionings, which are essentially bounded to the themes 2, 3 and 4 of the scientific research program.

In parallel, an important part of the field work during this campaign concerned the study of the sector of Jibal al-Khashabiyeh, located immediately to the south-west of Upper Wadi Hudruj sector. Remote sensing using high-resolution satellite images, previously to the fieldwork (cf. Section II.2. on the methodology), had allowed the identification of numerous linear structures several kilometers long, presenting big similarities with protohistoric arrangements, known in particular in northeastern Jordan and designated as “kites”. No convincing explanation was however provided to justify such a geographical limited distribution. The structures identified through remote sensing exploration were representing the first possible occurrence of kites in the southeastern desert of Jordan, out of the known distribution area.

The examination of these structures in the field was thus defined as a primary objective of the campaign. The study of kites allows approaching a fundamental question of the protohistoric occupation of the desert peripheries, closely related to the exploitation of the animal resources and its evolution through time. Human involvement into the activities of hunting and breeding is indeed at the heart of the reflections on the processes of development of the subsistence strategies (themes 1 and 2 of the research program). Such as defined, through the study of two adjacent sectors of the desert margins of southeastern Jordan, the organization of the fieldwork campaign allowed to approach a range of thematics emphasized by the scientific research program. 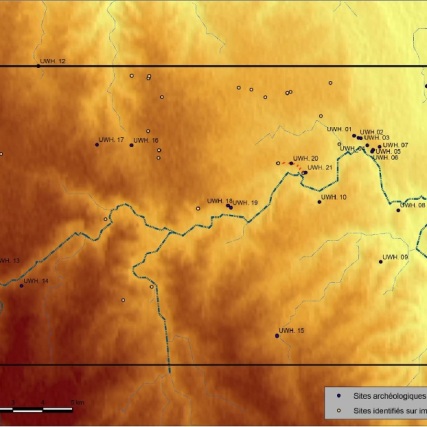 Location map of the two study areas of the Upper Wadi Hudruj and Jibal al Khashabiyeh concerned by the June 2013 fieldwork season. 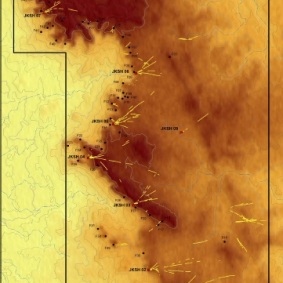 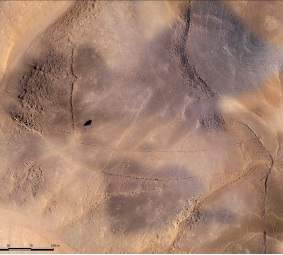