The work during this fieldwork season focused on the southern Jafr study area (Zone 1) of the research program. Within this sector, the field exploration concentrated on the study areas of Jibal al-Ghadiwiyat, located about 90 km to the southeast of Al Jafr. Clear research aims oriented the choice for the archaeological work and will be underlined below. The study area of Jibal al-Ghadiwiyat covers a square of 13 km sides, delimitated by the border with Saudi Arabia to the southeast. It covers a surface area of c. 120 km² and is represented by a landscape of limestone hills which constitute the southeastern border of the Jafr basin. The topography is dissected by hydrographical network of wide wadis, flowing towards the northwest and feeding the Jafr basin. The wadis al-Ghadiwiyeh Um Tor and Ghadiwiyat are the two main drainage systems flowing through the area. In the southern extremity of the study area, the limestone landscape is highly eroded by the drainage system and is replaced by a sandy alluvial plain extending towards Saudi Arabia to the south. This geographical entity is materialized by a sandstone bedrock following a gentle slope towards the south. Several shallow wadis run through this area and they show a scattered vegetation of shrubs. The area is presently hyper-arid and receives less than 50 mm of annual rainfall.

The choice of this study area was oriented by the observation of high resolution satellite images available on Google Earth and Bing Maps portals, allowing identification of an important number of potential archaeological sites. Among these, we were able to identify the remains of stone alignments reminiscent of the “kites”, structures generally interpreted as traps for gazelle hunting, and which are better known in the northeastern harra. The presence of such a structure was echoing our previous discoveries of kites in Jibal al-Khashabiyeh area. The exploration of this sector east of the Jafr basin allowed at that time to identify the first testimony of such structures in the southeastern badia while they were thought to be exclusively located in the northeastern harra. The data provided some clues supporting a function of these structures related to the hunting strategies. This preliminary exploration allowed moreover to provide some clues which could indicate a chronological attribution of these structures to the PPNB final (PPNB) or rather to the Late Neolithic.

Moreover, beside this kite testimony, the satellite images allowed to identify numerous stone enclosure campsites within the study area. These campsites have a specific organization represented by a complex architectural layout, and are comparable to those that we previously identified further west in Al-Thulaythuwat area. 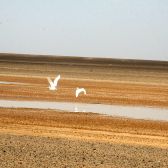 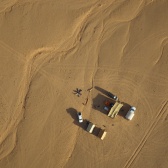 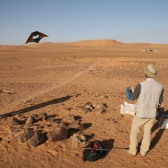 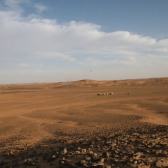 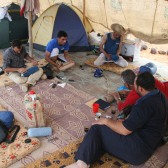 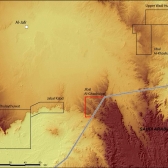